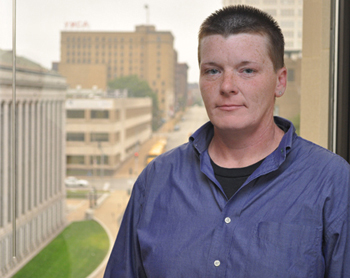 The last several years have hardly been a walk in the park for area-resident Tracy Umar. Addictions to controlled substances such as crack cocaine and multiple stints in and out of prison have plagued her adult life. Umar is candid with the reality that the problems she endured were because of her own decisions, but surely the lack of a family foundation and supporting shoulder did not help the situation.

However, the Tracy Umar before her prison release date on June 21, 2010 and the present day Tracy Umar are two completely different people. The Tracy Umar of today has a steady job and income serving as a main cashier at Busch Stadium and the Edward Jones Dome, has sobered up and most importantly of all – has reestablished a connection with her young daughter. Umar did all the work to turn her life around and chose her new path in life; however it was ARCHS’ Reentry Mentoring Partnership that helped pave a path for her.

ARCHS was the only recipient in the State of Missouri to receive federal Second Chance Act funding for $265,944 to create a pre and post prison release mentoring program to serve non-violent offenders. ARCHS works with Missouri Department of Corrections, Missouri Board of Probation and Parole, Big Brothers Big Sisters of Eastern Missouri, GUIDES Family Life Center, Humanitri, Institute for Peace and Justice, and Helping Offenders Maintain Stability (HOMS) to implement the grant.

Before coming into contact with HOMS, who ARCHS contracted to mentor the offenders, Umar was not confident she would find employment. She vowed to do whatever it took to stay on the right track, even if that meant getting on HOMS’ “last nerve” in an effort to find assistance.

“All I knew was I wasn’t going back,” Umar said.

Through ARCHS' Reentry Partnership, Umar was provided with mentoring, professional and casual clothes and much more. Having that backing has not only allowed for her to gain employment, but she has also become a licensed renovator with the U.S. Environmental Protection Agency (EPA) and plans to start school in January to earn her Associate Degree. Umar also plans to speak with a local union soon about beginning a three-year apprenticeship.

On top of all that, Umar was recently elected President of the Osage Oxford Recovery House which helps ex-addicts. As she looks at her watch to check the date, Umar can tell you exactly how long she’s been clean and the positive example she hopes her sobriety length serves for the other addicts at the House.

“I’ve been sober for five-years, four months and two weeks,” Umar said. “They [at the Recovery House] look up to me. A friend there told me I was an inspiration, and I didn’t know how to take it. I was baffled.”

Looking forward, Umar knows her life has changed and she’s happy for it. She knows she was ready to make the change, but also realizes how much assistance the ARCHS’ Reentry Mentoring Partnership helped further her potential.

“Life is presenting itself right now, and only we can really change it. But we have to want it, and we have to do all the footwork. The help I received was great, but they can only do so much because if you don’t want it then it doesn’t matter how much help you get,” Umar said. “I am better than spending another two-and-a-half years in prison. I still have one year, 10 months and 10 days left on parole, but that’s not going to matter because now I have a foundation built for me.”