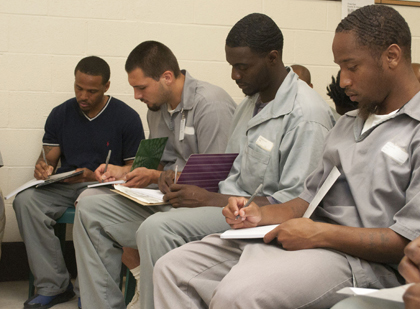 The pen of Missouri Eastern Correctional Center (MECC) inmate Demetrius Williams scribbled back and forth across his notepad during a self-reflection exercise. Deep thought kept Williams' eyes focused on the paper in front of him as words became sentences, sentences became paragraphs, and paragraphs became a deeper meaning to why he was in prison.

Williams is one of dozens of men enrolled in ARCHS' Second Chance Act Mentoring Program, which assists individuals toward a positive life change through activities such as the writing process. Journaling allows individuals to share and receive feedback on their thoughts with peers. It also allows individuals to take a look at past feelings and criminal behavior, and explore different ways to change their perceptions and attitudes

It also allows individuals to take a look at their past feelings and criminal behavior, and explore different ways to change their way of thinking to live in a positive way.

"This has to be the best class offered here (MECC) because you feel like you are taking something away with you, and also that the people really care," Williams said, whose been in prison four years for robbery. "It makes a big difference."

ARCHS was awarded $265,944 by the U.S. Department of Justice to create a pre and post release prison release mentoring partnership to serve non-violent offenders who are set to be released from MECC and the Women's Eastern Reception, Diagnostic and Correctional Center in Vandalia. ARCHS was the first organization in Missouri to be awarded "Second Chance Act" federal funding. Journaling from Prison is a component of ARCHS' program.

ARCHS works with Helping Others Maintain Stability (HOMS) and others to go into the prisons and provide the mentoring and additional support services. The program has served 167 pre-release and 87 have continued to receive post-release services

"The program benefits those offenders that are willing to change and have made the commitment to change. The program teaches the processes for change and encourages the offender to accept personal responsibility for their own positive lifestyle change," said Felece Brown, HOMS' Chief Executive Officer. "It also places positive people in the offender life that might have been absent in the past. It also provides resources and opportunities for individuals that they probably would not have obtained on their own."

MECC inmate Toussiant Harris, who has been incarcerated three years for assault, said he enrolled in the journaling program to help make a life change.

"I've been in this program for five months because I'm looking to change before I get out in 2013," Harris said. "This is a benefit because it allows me to work on myself, and helps keep me on track. When you're down, because you are in prison, it helps and makes you think about things."

In addition to the grant award, ARCHS and its partners will provide an additional $106,442 of in-kind funds to support the grant's activities. The partnership is designed to enhance existing pre-release services provided by the Missouri Department of Corrections.