The first in a series of “white papers” issued by the St. Louis Alliance for Reentry (STAR) is being released today (Tuesday, March 15) during a regional summit addressing prisoner reentry topics. Today’s summit is providing the community with an update on STAR’s 2010 accomplishments and 2011 goals. A documented rise in the use of heroin throughout the St. Louis region will be a topic of the summit. More than 270 people are attending STAR’s second annual community summit that features speakers such as Missouri Department of Corrections Director George Lombardi, St. Louis Mayor Francis Slay, St. Louis County Executive Charlie Dooley and prisoner reentry experts. 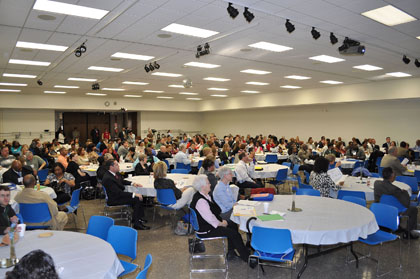 The 2011 STAR Summit will be held from 8:30 a.m. to 3:30 p.m. on Tuesday, March 15 at St. Louis Community College - Florissant Valley. Advanced registration is required. Deadline for on-line registration is March 4. There is a $10 registration fee per person. Lunch and parking are provided.

To register online, check back for updates.

ALL SPOTS ARE CURRENTLY FILLED FOR THIS EVENT.
Check the Foundation's website for future events.

Lutheran Foundation of St. Louis will hold an open informational meeting at 3 p.m. on Thursday, March 3 at Lutheran Hope Ministries (660 Mason Ridge Center Drive, St. Louis 63141). The purpose of the meeting is to provide information on one of the Foundation's funding focus areas, services to prisoners/ex-offenders and their families, and opportunities for potential funding support.

These funding focus areas were selected after several months of exploring our past grant history, current community needs, opportunity for impact, and fit with our vision.  Those familiar with the Foundation will note that the areas identified build on our past funding interests and rich heritage of improving the care of people through supporting people of faith, particularly Lutherans, as they work to improve the care of people in our community.

Sorry, This Event is Currently at Capacity. To register for the meeting, click HERE and to learn more about these funding focus areas, including services to prisoners/ex-offenders and their families. Due to space limitations, it is asked no more than two people attend from your organization. Advanced registration is required by February 28.

SLU Tackles Issue of Prison Reform and Those Who Help Offendors 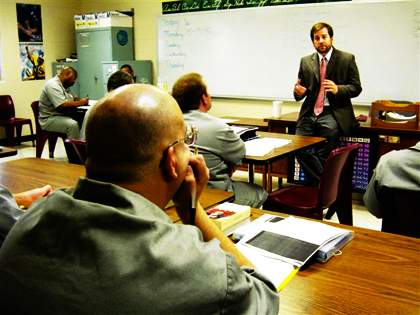 Article below copyright 2010 by Universitas, the magazine of Saint Louis University. All rights reserved. Reprinted with permission.

By Nick Sargent
In almost every way the Eastern Reception, Diagnostic and Correctional Center (ERDCC) is not what you would expect.

A far cry from the dark, brutal images of prison you see on TV and in movies, on a cold, early May morning the ERDCC in Bonne Terre, Mo., looks more like a sterile, rural medical complex surrounded by layers of impenetrable fences. Modern brick buildings circle an open courtyard with an outdoor basketball court located in the center of it all.

When prisoners move across the yard, they do so in an orderly fashion. They talk among themselves in small groups, and no one is fighting. Dressed in uniform, the guards don’t yell. They are calm. But it’s clear who’s in charge and who will soon be returning to their cells.

On the far end of the yard sits an unassuming one-story building. Walking into the building as the sun peeks over the horizon on this day is a man dressed in slacks and a sport coat. Dr. Grant Kaplan is the most unlikely looking character at this maximum security correctional center.

Read more: SLU Tackles Issue of Prison Reform and Those Who Help Offendors

ST. LOUIS • Nick wanted to kill himself with heroin.

He was already dealing with horrible images seared into his brain as an Army infantryman who was in the Pentagon during the 9/11 terrorist attacks.

Then two years later, he was almost killed in a car crash.

And nearly two years ago, his 2-year-old son was killed in an all-terrain vehicle accident. Nick was sitting with him on the vehicle when the boy apparently hit the throttle. Nick fell off the back, and the ATV struck a tree with the toddler still aboard.

Nick, who did not want his full name used in this story for fear of damaging his business, said he wanted to die, too. He went from a clean-cut veteran who had never used drugs to a heroin addict. "I was using it as a means to an end," he recalls.

But this month, Nick, 31, of Eureka, is set to graduate from Veterans Treatment Court, a special program started in last January as part of the St. Louis Circuit Court.

The program is rigorous. Participants — all of them non-violent offenders — must attend support group meetings, submit to random drug tests and meet frequently with a judge and representatives of the Veterans Administration.

"It's a little like the military," said Nick. "They force you to do something and you learn from it. It's one of the best things you've ever done, but you never want to do it again."

About 12 veterans are attending the court in St. Louis. If they successfully complete the steps, the charges against them will be wiped from their records or they may be released early from court supervision.

The process takes from a year to around 18 months; Nick is set to be one of the first graduates.